The Legend of The Free 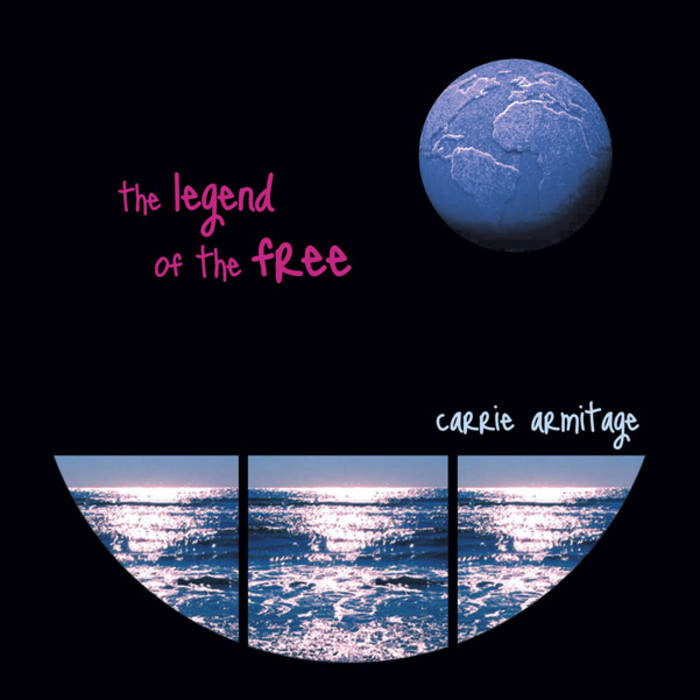 Artist: Carrie Armitage
Album: The Legend of the Free
Review by Matt Warnock
Rating: 4 Stars (out of 5)
The term singer-songwriter often brings to mind a lone artist, sitting in the corner of a pub or café strumming open chords on their guitar as they sing laid-back songs to crowds of loyal listeners. Artists such as Joni Mitchell and Neil Young have come to define the genre with their copious releases over the years, but it’s artists such as Carrie Armitage that are working overtime to redefine the genre and propel it into the 21st century.
Armitage’s 2010 release The Legend of the Free is an intelligently written and creatively arranged collection of tunes in the singer songwriter genre while destroying any preconceived notions of what a singer songwriter should be. Her use of ambient beats, a la This Mortal Coil but not as depressing, combined with extended vocal techniques and spoken word help lift this album above the fold and place it into a category all its own.
Songs such as “Beautiful Blue” showcase Armitage’s wide vocal range as she uses her upper register to build climax after climax during the song’s chorus and verse section, though using section labels such as chorus, verse and bridge might not be appropriate for this record. Armitage’s music seemingly floats in the realm between formal song writing and the through composed. Her songs don’t fit into the typical cookie cutter formulas of today’s radio friendly pop tracks, but they aren’t completely through composed either. Each tune features enough repetition for listeners to grab onto, while at the same time constantly introducing new sections and material throughout, a difficult task for any songwriter to accomplish.
Besides possessing an incredible vocal range and tone, Armitage uses an interesting collection of syllables on songs such as “An Eye to the Sky” to gain the maximum emotional effect out of her performances. Mixing hard syllables, with her favorites beginning with the letter D, and open vocal sounds helps Armitage broaden her vocal effects beyond traditional words and phrases. Though her music shouldn’t draw a direct comparison to a singer like Bjork, it is moments like this that at least raise a temporary connection between the Canadian songstress and the Icelandic composer.
Each song on the album is carefully written and arranged in a manner that reflects Armitage’s identity as an artist, without allowing songs to become strenuous on the listener’s attention span. Moving between keyboards, acoustic piano, guitar, electronic drums and multiple layers of vocals, she is able to make each new track musically and lyrically distinct without losing the personal touch that enables each track to be identified as part of a larger whole.
With all of the layering, electronic work and vocal dynamics soaking the album’s twelve tracks, one of the most surprising and captivating songs is the acoustic piano-vocal duo “Looking Out on the World.” Featuring a harmonic dynamic that weaves between major and minor, with Armitage’s vocal line following as she sings over the major section and speaks over the minor, middle section, the song is a nice sidestep from the more heavily arranged songs on the album. There are even moments on the album, “Peace, Hope, Trust, Love” for example, where she reaches back and draws out a keyboard sound that conjures up memories of Pink Floyd’s 1977 album Animals, showcasing the singers’ wide range of influences.
This lack of discrimination in its use of form, influences or musical textures is one of the reasons why the album is so successful. Too often ambient records become monotonous after a few minutes, but this is not the case with The Legend of the Free. It weaves in and out of many different genres, styles and tonal characters while at the same time staying true to the composer’s musical voice and intent.

Turn an eye to the sky
Think, Love

An eye to the sky
Bewitched

Turn an eye to the sky…

An eye to the sky
Breathe

An eye to the sky
Behold

Every year, fishing nets kill up to 300,000 whales, porpoises and dolphins globally

A warning heeded
Shhh…lights in the water!
We’re overheated

Looking out on the world
Thinking about all the ways
We could have done better
And then I’m thinking about yesterday
We really thought we knew the way didn’t we?

In the last 500 years,
human activity is known
to have forced
nearly a thousand
species
to extinction

The backdrop to many a scene

Light of candles, light of Moon,
Penetrate this humble room.
Take this wish that I hold dear,
Make it become crystal clear.

Let this stone my wish hold fast,
Grant it true and make it last.
For good of all and harm to none,
As I will so it be done.

Beyond the bounds of time and sense
Earth, Sky, Sea as One
As it is so, it be done.

I had this really big dream
Of you and me

We woke up one morning
When we looked into the past
We said ‘We can’t keep making the same mistakes!’

Encompass all this represents
Beyond the bounds of time and sense
Earth, Sky, Sea as One
As it is so, it be done

I had this really big dream
As it is so, it be done

We stand up
Committed
And say we won’t stand for it
Athena
Turn around and face the music
Track Name: Commonality
Commonality

We all need air
Clean air

We all have stories
Incredible stories

We all need love

We all need earth
This earth
Beautiful Planet Earth

Commonality
Track Name: The Legend of The Free
It was the story of all stories
Once upon a time, Glory turned to greed
There was a world rich with potential
Drenched with promise and beauty
Magical indeed
It could satisfy your every need, no reason for greed
Yet greed it was that destroyed her
This relentless insatiable need
They could never be pleased
Not for a moment in time
Walked by The Tree of Knowledge
Locked and loaded
Oblivious to peace
Glory turned to greed
[EARTH][FIRE] Air and Water
Ever after
The Beauty and the Beast
The Legend of The Free
And it wasn’t that they didn’t know
They knew that they were free
They found the scattered wisdom seeds
but they were gimme gimme me me me
Until one day there was nothing left for greed
They surrendered the keys to the sea
Set their sights on a far away galaxy
Just for a moment in time
It was just for a moment...

Bandcamp Daily  your guide to the world of Bandcamp

Tasty gems from around the world, plus interviews with Kaitlyn Aurelia Smith and Nick Hakim.